Taking the Plunge into Private Practice 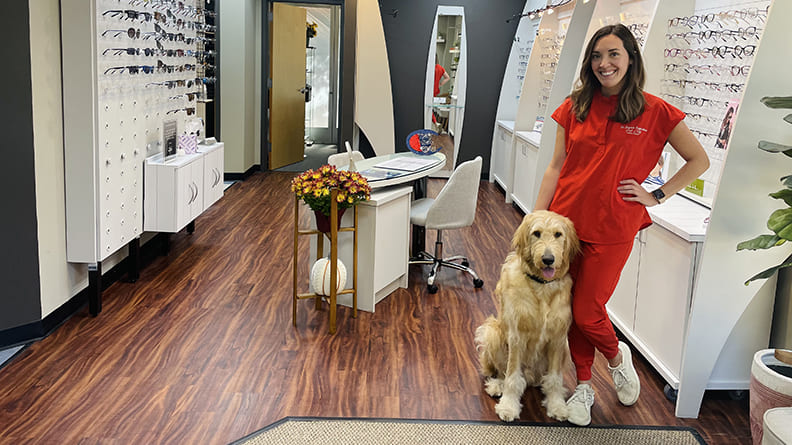 Three years ago, as a recent optometry school graduate, I wrote about my decreased sense of urgency to own my own practice. While practice ownership had always been a goal, I realized soon after graduation that I needed some more time in the field before striking out on my own. Well, things changed (thanks, COVID!), and today, at age 29, I am the proud owner of Oak City Vision Center in Raleigh, North Carolina!

Not Quite Ready…
My hesitation to open a practice right after graduation stemmed mainly from my feeling that I wasn’t ready. During school, I was very involved in my Private Practice Club and the Student Optometric Leadership Network (SOLN), and I really benefited from the support I received from like-minded students, practicing ODs I met during networking events, and my VSP Vision mentors. That support continued when I joined an established private practice and was able to work alongside doctors who taught me the nuances of the profession not covered in school. I was content in my role, knowing I would open a practice when the time was right.

Then, COVID hit. The pandemic forced many of us—myself included—to press pause on our lives and reevaluate. I began asking myself constantly why I didn’t own a practice yet. Like many young ODs, I had been waiting until the right time, and I slowly began to realize that the “right time” doesn’t exist. There’s no checklist where you check all the boxes and then know you’re ready; there wasn’t something magical in my life that was going to tell me the time was right. I knew I just had to go for it—to jump into the water and then learn how to swim.

A Leap of Faith
The doctor I was working with at the time was looking to sell one of his locations, so after some negotiations, I took the plunge and bought the assets to his practice. I like to say that it was a warm start—I got the advantage of the location and the equipment, but I started completely fresh. Because he was a retina specialist and I was an optometrist in primary care, I needed all new patients, new staff, and a new name. I had to quickly learn how to market a practice, teach myself about things like building a website, pick a name that would resonate with the community, and even design my own logo.

No Place Like Home
I chose Oak City Vision Center because I've lived in several places throughout my life and Raleigh, a.k.a. “the city of oaks,” was the first place that really felt like home. Unlike other medical offices, which can feel cold and uninviting, I wanted my patients to get that comfortable feeling of home. I channeled that sentiment throughout the practice, from the bright and cozy décor accented by plants that reinforce our name, to Simba, my cuddly dog who comes to work with me every day. People love Simba: he’s all over our social channels, and patients come in asking for him more than they do for me.

Accepting Help
One of the most important things I learned during this journey was to stop trying to figure out everything on my own and seek out people who already know how to do it. This was a humbling lesson for me. As ODs, we are where we are because we’re efficient, hard-working, often Type A personalities who don’t like to ask for help. I learned quickly that it saved a lot of time to admit I didn’t know how to do something and call someone in my support network who could teach me how to do it.

That support network I developed and relied on as a student has been even more critical as I’ve branched out on my own. The investment VSP Vision made in me as a student, enabling and incentivizing me to attend conferences and networking events, facilitated the development of lifelong contacts who ultimately helped me to open a practice at age 28. VSP continues to support me as a private-practice owner by offering education and resources, competitive reimbursements, and the Premier Program, which I am on a solid path to participating in. The Premier Program will help bring new patients into the practice and provide discounts and benefits for both my patients and the practice.

Learning to Swim
Just like there’s no checklist to tell you you’re ready for practice ownership, there’s no defining moment that says you’ve made it. My journey was not how I planned, and it hasn’t been easy (especially during COVID, when, despite a full schedule, only a couple of patients would show up, or when I didn’t know where my patients were going to come from, or how I was going to pay the bills). But the connections I’m able to make with my patients as a private practice owner—my patients, no one else’s—provide a sense of happiness and fulfillment that far outweighs the struggles. “As eye see it,” that happiness tells me I’ve made it, and as unconventional as my journey has been, I wouldn’t change a thing.

Bringing Life into Focus in School and Beyond
Paying it Forward, One Eye Exam at a Time
The Freedom to be Me
The Key to our Continued Success
Inspiring Others; Changing Lives
Seeing the Full Picture of Diabetes